Day 1 in the books!  What’d you think?  Bit of a weird slate where they had (2) 10:00am games and then pivoted to 3 games at different times.  The Liverpool/Leeds game was an absolute blast and should show you how a new team will try to play in this league.

It’s INSANE that they tried to play that way against Liverpool but in a sense, it was genius.  Liverpool love to push numbers forward and rely on their talent to win 1v1 battles.  Sometimes that means 1v1 at the back and you get teams in behind with clear cut chances.  Now look, they had 3 shots and scored 3 goals on 0.75 xG.  I don’t care.  They created those chances against one of the best teams in the world.  Leeds are going to be a problem for a lot of teams in this league.

As for our cash lineup, I won everywhere. 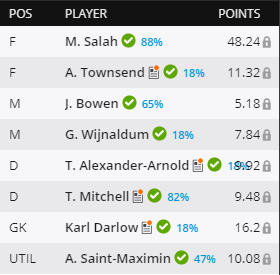 You can see my ownership numbers in there as well across all competitions.  (mostly cash)  Wijnaldum hit value. TAA starting actually HURT my overall score with the pivot off Robertson but Gini was good enough to get it done and the 2-0 win by Newcastle gave Darlow the CS/W bonus.

This is an important lesson for those new to cash soccer contests.  Guaita was the highest-scoring GK and went off in the first game.  Everything was acting like their dog just died.  Guys…he was 20% or less owned.  It’s never fun but he wasn’t 50%!!  We were FINE and of course, cashed with the rest of our build.

Panic less.  Cash more.  By the way, I know some people are curious about this.  I left $400 on the table with my cash build.  Anything more than $700-$1000 has me scratching my head but leaving a few hundred on the table is absolutely fine!

I literally cannot wait for this match.  I’m so curious to see where Leicester are mentally.  They had an EPIC collapse late last season to miss out on top 4.  Frankly, they didn’t deserve to be in the top 4 and earn Champions League status.  They had a great start to the year but really fell off after Christmas.  You have to put in a full season in this league.  From a talent standpoint, they absolutely will win this game.  In fact, I’ll likely be putting that in our bet pack.  Here they get the new boys who just saw their compatriots lose their first games (Fulham, Leeds both lost).

This is not a West Brom team that makes these spectacular home stands.  They won only 1.74 pts per game at home last season.  They scored nearly 2 goals per game and conceded just over 1.17 but did not win a single game (home or away) against Leeds, Brentford or Fulham; all teams that finished in the top 4 in the Championship.  What does that mean for us?  If they can’t beat the best of the championship, why would they beat one of the best teams in the Prem?

I’ll be looking to grab some Leicester here with Spurs rightfully being the chalk.  Leicester win and Jamie Vardy gets off the mark, already 3 goals behind Mo Salah.

I’m loving the Spurs All or Nothing series on Amazon.  It’s a great look through the window into the Spurs locker room.  Jose has long been a man who can get the best out of each player.  That is his strength.  Tactical and technical proficiency is seemingly second in his locker room.  To me, that hurts him and his teams.  This game has advanced from the ra ra, dig deep kind of coach to require real nuance.  Unfortunately, I think Spurs lack that with Jose.

Normally, I would say ‘who cares?’  However, in comes Carlo Ancelotti and Everton.  There were high hopes for Everton last season.  They fell short and the manager change took place in just enough time for Everton to show some promise.  Ancelotti is looking to build on that promise with some new recruits.  Honestly, I’m waiting to see how they line up before making any crazy judgments.  There are so many variables at play here.

Last season, Lucas Digne was the do-everything fullback who was a near must-play at any price.  Now left-footed Colombian James Rodriguez comes in with Real Madrid pedigree and one of the sweetest crosses on earth.  Who takes what?

As for game flow, expect a tight game.  These teams play to a 1-1 draw and a 1-0 Spurs victory.  While I think Jose is a tactical dope, he can absolutely overthink things in an attempt to look like he knows what the hell he’s doing.  I’m of the opinion that Spurs could run over Everton if Jose unleashed the horses.

We’ll see how it goes on Sunday.

I love Vardy here.  WBA don’t concede a ton at home but Leicester will want to make a statement. He’s -110 to score any time and I may even hit those odds.  He’s GPP only but finished last season with 5, 3, 6 and 3 shots in his last 4.  Only 3 of those shots hit the target.  That is well below his recent average and should he get those chances here he’ll get at least one.

He can also be played at the M position which provides some flexibility but he’s taken over some set piece responsibilities in addition to his massive open field prowess.  He doesn’t typically hit his ceiling in games with Harry Kane and both will be playing here.  Mostly cash but some consideration for GPP.

So weird typing that out.  From Real Madrid to Everton is a fall from grace for some but James seems to be fitting right into stride here.  You have to remember he’s played for Ancelotti before.  He’s familiar with the manager and vice-versa.  This might be the last time we get him at under $8k.  Even as a road dog I love it in cash.

Don’t yell at me, I didn’t make this price.  The facts are that this is a 2 game slate and goals will be at a premium.  That’s why we are willing to pay over $8k for Vardy and nearly $10k here for Kane.  I’m literally torn on potentially paying this for cash or just trying to grab Son and James.  I will absolutely have a Son/Kane/Berg lineup in GPP.  At +110, he’s not a lock at this price but he has the second-highest goal-scoring odds on the slate and can start hot.

This is simply far too cheap.  I understand he might not start but I rate him over Lucas and that’s who he’d be playing in place of if he does start.  He came out of the gates like a ball of fire after this transfer.  Depending on where he lines up, he might have a matchup against either Digne, stinks at defense, or Seamus Coleman who’s 100 years old.  I love his pace against this backline.

The man is only 31.  It’s easy to think he’s like 40 with how long he’s been around.  He bagged 10 goals in 34 games last season.  There is a chance he doesn’t even start but when he does, he’s on set pieces and is certainly in play at this price.  We got our Callum Wilson goal on Saturday.   I think Charlie has the best chance of the cheap plays.

No Maddison (likely) and no Chilwell (sold) means Tielemans will be thrust into prime playmaker territory.  He can handle that role and shined late in the season after Maddison went down.  He finished with 4 straight games in double digits including one with 14 crosses.  If he’s filling in that Maddison role he also has shot upside to his game.

He took most set pieces for West Brom last year and I expect him to do the same here.  Pereira also took some corners as well but for over $5k less I think we can take the chance here.  I’m not expecting 3-4x or anything but for cash, this is great savings with floor.  He finished 3rd in the entire league in crossing stats.

I’ve said for a while that he would really shine with better players around him.  Ancelotti obviously believes that as well and brought in some serious talent.  Again, I have both managers being conservative here so I’m not as high on their options today as I will be the rest of the year but on a short slate he’s a tough total fade.

The former West Ham man spent last season on loan here with some decent production.  He did struggle at this level 2 years ago but for a young player, that’s an eternity.  He has electric acceleration and could hit Leicester on the break.  GPP only.

He’s only just made his transfer and might not feature but will certainly deserve consideration if he starts in this system.

I’m going to keep listing him until Jose wakes up and PLAYS THIS MAN EVERY GAME.  He’s in their top 3 mids and plays less than a third of their games.  It’s wild.

I’m glad to see him under $5k after Saturday’s pricing.  This isn’t necessarily “value” but it’s priced appropriately and on a 2 game slate I’m willing to pay for his floor here.

I’m not 100% sure who starts but Jose showed that he liked to attack down the right side.  Doherty wasn’t purchased to ride the pine (I don’t think) so I have him starting and at $5k he’s viable.  I’m not dying to play him and will likely be taking Justin and one of Gibbs/O’Shea.

This is mostly a reflex.  Digne under $7k was an auto-play last year.  This year, I’m not so sure.  I likely WON’T play him in cash if James Rodriguez starts.  If he doesn’t, all in!

I prefer Gibbs but both West Brom fullbacks are in play at these prices on a short slate.

Most likely to get a W/CS

Home dog but he has quality.